Testing shows these waves are sick, in totally the wrong way 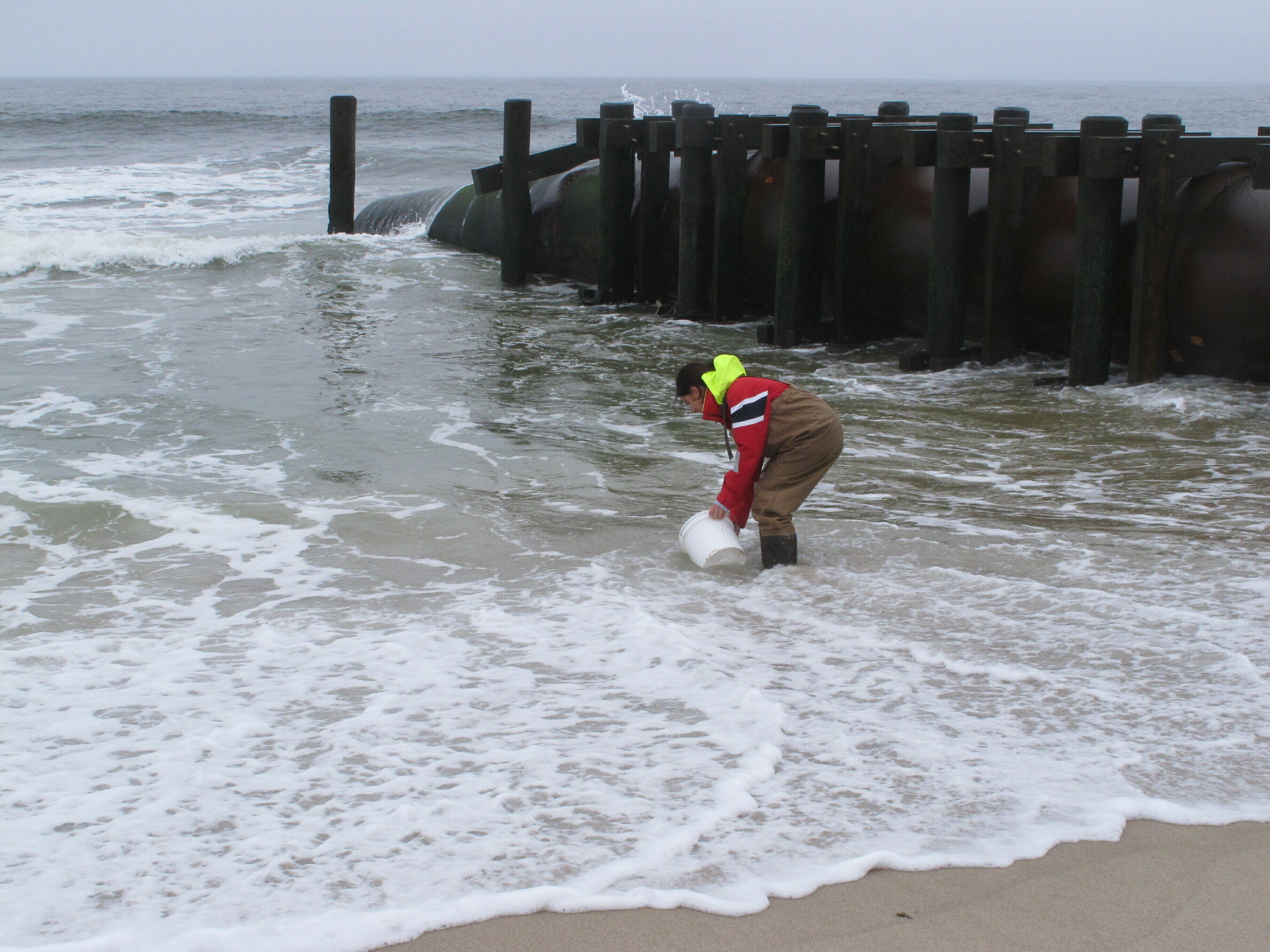 This May 30, 2019 photo shows Skye Post, who will be a junior at Monmouth University this fall, taking an ocean water sample near a storm drain outfall pipe on the beach in Long Branch, N.J. University researchers are studying the relationship between heavy rainfall and elevated levels of bacteria from animal waste that gets flushed into storm sewers and out in the ocean at popular surfing beaches at the Jersey shore
(AP Photo/Wayne Parry)

Most surfers know it’s best to avoid surfing near pipes that dump storm water into the ocean soon after a storm, due to the increased chance of getting sick from bacteria that enter the surf.

Many do it anyway because the periods just after storms often bring bigger waves, prompting them to hold their nose and brave the so-called “chocolate tube” or the “root beer float.”

Although the relationship between heavy rain, outfall pipes and water-borne bacteria has been well established, it continues to be studied around the country and the world.

One such study is underway at New Jersey’s Monmouth University, where researchers are evaluating water quality at popular surfing beaches along the Jersey shore with an eye toward documenting higher levels of harmful, illness-causing bacteria in the water after storms.

The idea is to give surfers and others who use the water more information to make more informed decisions about when to surf and what might be in the water around them.

“It’s not a question of if you’re going to get sick, it’s when,” said Richard Lee, a surfer and executive director of the Surfers Environmental Alliance, which is funding the $30,000 yearlong study in New Jersey. “There have been ear infections, eye infections, respiratory infections, intestinal problems.

“The water is murkier; sometimes we call it the ‘root beer float,'” he said. “You get this orange-brown float on the surface.”

A 2010 study by the Surfrider Foundation found surfers are more likely to get sick from being in the water than other beachgoers. This is partly because they are in the water more frequently and for longer periods, and ingest 10 times more water than swimmers, the survey found.

A team of student and university staff researchers is taking water quality samples before and after each rainfall this year.

“When we get big storms, the stuff that’s getting into the water is what’s making us sick,” said Jason Adolf, a marine science professor at Monmouth. Most of the bacteria come from pet waste in streets that gets washed down drains and out into the ocean, but occasionally sewer systems overflow into storm drain systems, as well, adding human bacteria to the mix.

New Jersey authorities also do their own beach water quality testing along the shore, but mostly during summer months. The Monmouth testing will continue through fall and winter, when storms can be more numerous and surfers are still in the water. Jeff Weisburg, a specialist professor who teaches about microbiology, health and disease, said fall hurricanes usually produce the best waves of the year on the East Coast.

While the state testing is used to issue swimming advisories and if necessary, to temporarily close beaches when bacteria levels are high, the Monmouth research is aimed more at documenting local conditions at particular beaches throughout the year.

Larry Hajna, a spokesman for the New Jersey Department of Environmental Protection, said the state has no plans to incorporate the Monmouth research into its own beach monitoring program, and noted “the connections between heavy rainfall, storm water pipe discharges and temporary increases in bacterial levels are well documented.”

Similar work has been going on for years wherever surfers take to the water. High school students in Santa Monica, California, have tested the waters at popular surfing beaches there. Health departments in Los Angeles and San Diego monitor waterquality near outfall sources.