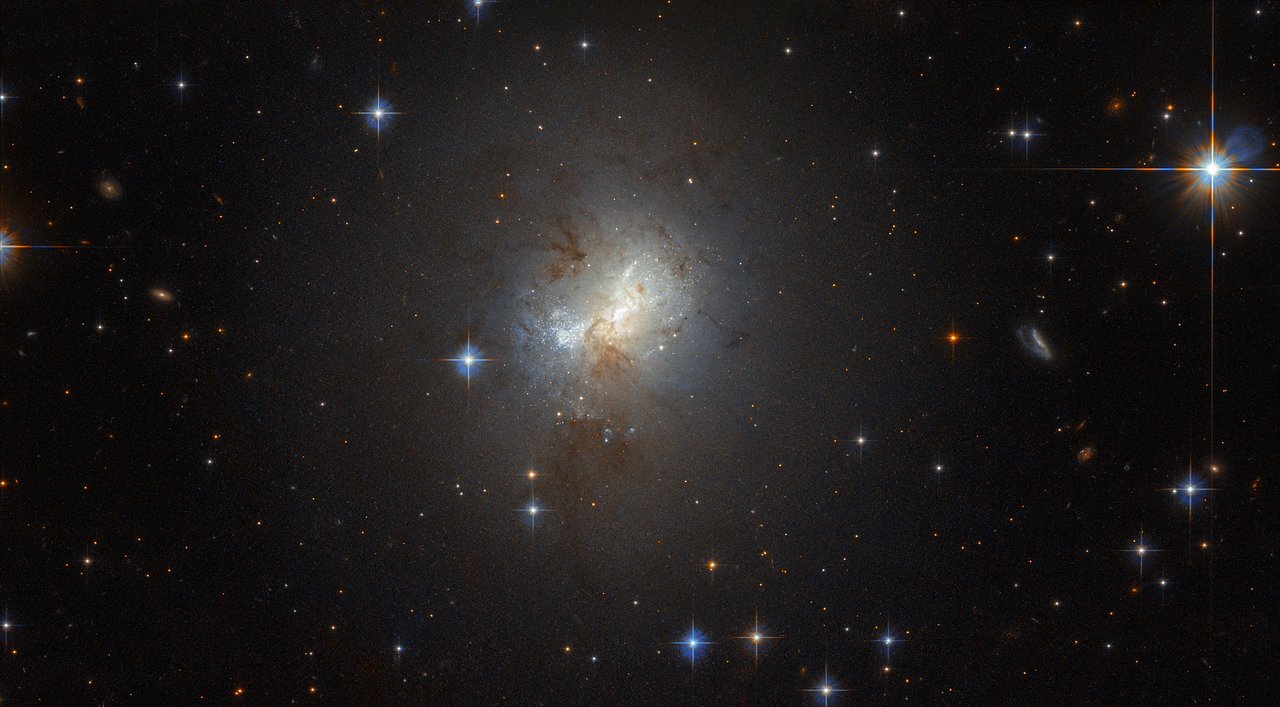 Nestled within this field of bright foreground stars lies ESO 495-21, a tiny galaxy with a big heart. ESO 495-21 is just 3000 light-years across, a fraction of the size of the Milky Way, but that is not stopping the galaxy from furiously forming huge numbers of stars
Credit: ESA/Hubble, NASA

Nestled within this field of bright foreground stars lies ESO 495-21, a tiny galaxy with a big heart. ESO 495-21 may be just 3000 light-years across, but that is not stopping the galaxy from furiously forming huge numbers of stars. It may also host a supermassive black hole; this is unusual for a galaxy of its size, and may provide intriguing hints as to how galaxies form and evolve.

Located about 30 million light-years away in the constellation of Pyxis (The Compass), ESO 495-21 is a dwarf starburst galaxy—this means that it is small in size, but ablaze with rapid bursts of star formation. Starburst galaxies form stars at exceptionally high rates, creating stellar newborns of up to 1000 times faster than the Milky Way.

Hubble has studied the bursts of activity within ESO 495-21 several times. Notably, the space telescope has explored the galaxy’s multiple super star clusters, very dense regions only a few million years old and packed with massive stars. These spectacular areas can have a huge impact on their host galaxies. Studying them allows astronomers to investigate the earliest stages of their evolution, in a bid to understand how massive stars form and change throughout the Universe.

As well as hosting the cosmic fireworks that are super star clusters, ESO 495-21 also may harbour a supermassive black hole at its core. Astronomers know that almost every large galaxy hosts such an object at its centre, and, in general, the bigger the galaxy, the more massive the black hole. Our home galaxy, the Milky Way, houses a supermassive black hole, Sagittarius A*, which is over four million times as massive as the Sun. ESO 495-21, also known as Henize 2-10) is a dwarf galaxy, only three percent the size of the Milky Way, and yet there are indications that the black hole at its core is over a million times as massive as the Sun—an extremely unusual scenario.

This black hole may offer clues as to how black holes and galaxies evolved in the early Universe. The origin of

MORE of the story / click image TOP of PAGE